How Do Your Sleep Habits Stack Up?

Recently, Fitbit research scientists looked at aggregated sleep data from over 10 million users in 2015* and noticed some eye-opening patterns. Take a look at their findings, and then check out your sleep log in the Fitbit app to see how your personal bedtime numbers compare. 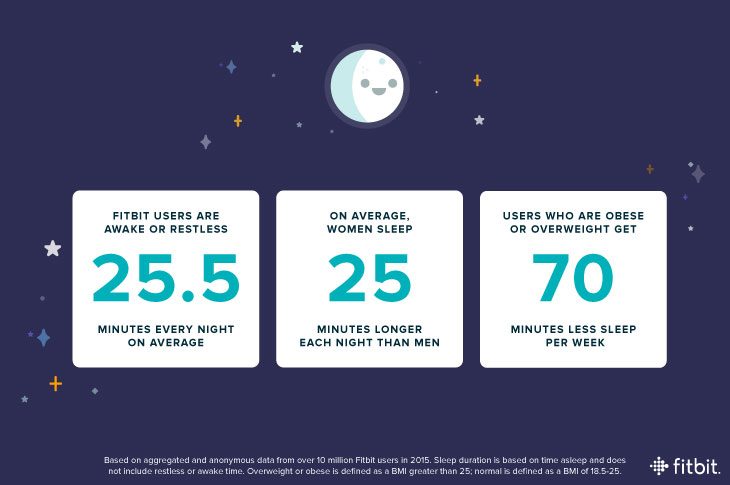 Have you noticed a pattern of restlessness in your personal sleep log? You’re not alone—most sleepers have a number of short periods of awake time in the middle of the night. In fact, data shows Fitbit users are awake or restless on average for a total of  25.5 minutes each night. “Sleep is not completely still,” says Michael Grandner, PhD, MTR, a Fitbit sleep advisor and director of the Sleep and Health Research Program at the University of Arizona College of Medicine. “We all move during our sleep, especially in stages 1 and 2—and this is totally normal.”

The aggregated, anonymized sleep data shows Fitbit users who sleep 7 to 9 hours per night on average have a lower body mass index (BMI) compared to those who only sleep 3 to 4 hours (27.4 and 29.7 respectively). Additionally, the Fitbit data shows Fitbit users who have an overweight or obese BMI (greater than 25) log 70 fewer minutes of sleep per week on average, when compared to those with a normal BMI (18.5-25).

A possible reason for these differences: “Lack of sleep is stressful to the body,” says Michael Smith, PhD, Director of the Behavioral Sleep Medicine Program at Johns Hopkins University and an expert sleep consultant for Fitbit. “It can cause higher blood pressure and heart rate—and it can also alter metabolism, leading to spikes in blood sugar that can lead to insulin resistance and weight gain.”

The Effect of Active Minutes on Bedtime

Want to clock more Zzz? Getting more exercise and establishing an earlier bedtime could help!

Fitbit data scientists note a correlation between active minutes and hitting the sack early—Fitbit users with the most tracked active minutes also seem to have a more consistent, and earlier, bedtime. The same group of Fitbit users logging the most sleep tends to hit the sack at 11:07pm on average, while those who don’t get as much shut-eye aren’t winding down until 11:55pm on average.

Having a consistent bedtime is important for your overall health and wellbeing, because it can set you up to get the right amount of sleep for you. “The body loves regularity,” says Grandner. “When you have a regular bedtime, your sleep biology can train itself around that time—your body knows when sleep is coming, so it can optimally prepare.” Fitbit data shows active millennials typically go to bed earlier. But a subset of that generation is actually logging the least amount of sleep. Why? The college-aged set might be prioritizing other activities over sleep. Maybe it’s a bit too much studying and partying for those co-eds—they aren’t hitting the sack until 12:22am on average, bringing the total amount of time spent snoozing down by sleeping 91 minutes less per week on average.

Meanwhile, Gen Xers who are more active get more sleep than their less active peers, and active Baby Boomers seem to be snoozing like babies! Take a look at some more cool, age-related sleep findings in the infograms below. *This research is based on aggregated and anonymous data from over 10 million users in 2015. Sleep duration is based on time asleep and does not include restless or awake time. Generations are defined as: Baby Boomers (age 55 and up), Generation X (age 35-55) and Millennials (age 18-35), as of May 1, 2016. A Fitbit tracker recognizes and awards active minutes when the activity you’re doing is more strenuous than regular walking, which includes everything from a brisk walk to a cardio workout or run. Active minutes are awarded after 10 minutes of continuous moderate-to-intense activity and for the purposes of this analysis were averaged across users.