Is Meat the Missing Ingredient for Female Athletes? Katie Forrest, 31, Austin native, and Fitbit Blaze user, was vegan for two years, running on a mostly raw diet. In college, she competed in road cycling, before picking up running and swimming with a friend. Her first triathlon was Ironman Wisconsin, where she won her age group and qualified for the World Championship in Kona. “I love the outdoors and that pure endurance mode,” says Forrest. “But leading up to Kona, I was suffering from superbad inflammation. My knee was so swollen, it looked like I had elephantiasis. I saw five doctors. They were talking about a total knee replacement.” Then she spoke to a naturopath, who suggested downplaying raw veggies and juice cleanses and making room for red meat in her diet.

“I freaked out,” says Forrest. “I didn’t even know how to cook meat. I bought a steak and boiled it—I had no idea what I was doing! But I stuck with it, and within a few days, my stomach issues were settling, and my knee had reduced by 50 percent. Within a few weeks, the inflammation was totally gone. No physical therapy, no surgery. In the past, I just kept thinking, I must not be eating clean enough. But now I understand, that didn’t make sense for my body. My body was craving protein, vitamins, and minerals. I needed meat.”

How Much Protein Athletes Need

If you slurp protein shakes, you know protein helps muscles recover and rebuild, but you may not realize it also supports your tendons and bones. Overall, men eat too much protein, but it’s a different story for women. “When I see one of my female athletes struggling during training, one of the first things I check for is protein,” says Lauren Antonucci, MS, RDN, CSSD, CDE, CDN. “That’s a huge sticking point. If you’re having issues, or feeling tired or drained, double check those grams. Usually, women aren’t getting enough.”

Among athletes, protein is a bigger topic than ever. Last year, the Academy of Nutrition and Dietetics updated their recommendation, adding more nuance. Instead of aiming for a total number of grams, they now suggest spacing your protein throughout the day, to maximize absorption. That means moderate amounts of quality protein every 3 to 5 hours, especially following strenuous training sessions, and during periods of intense training. Plus, they no longer separate protein recommendations for strength versus endurance training. So much for that old stereotype of pasta for runners and eggs for weightlifters.

The Best Protein Sources for Athletes

That said, protein doesn’t have to mean meat. You want to get protein from a variety of sources, including fish, legumes, nuts, and other plants. Athletes still love whey protein, which has so many studies behind it, and eggs are back in a big way. But the Academy does include lean meat as a good source of protein for athletes. And for female athletes in particular, meat offers additional benefits, providing vitamin B12, iron, and other minerals. Those help protect against iron deficiency and anemia, issues that come with endurance training, training at high altitude, and menstrual blood loss.

You can get some iron from veggies (keep eating those greens!). But eaten in moderation and as part of a balanced diet, red meat is still one of the best sources for protein and iron. So ladies, don’t pass on those dark meat chicken thighs and lean flank steak. You’ll be in good company. Shalane Flanagan loves bison meatballs. Sarah Hall is putting liver in her blender. And Katie Forrest went on to co-found Epic Provisions with her husband, Taylor Collins, so you have the option to throw a meat stick in your gym bag, instead of a granola bar.

How to Make Sure You’re Hitting Enough Protein

If you think meat’s been missing from your diet, a few ounces of lean grass-fed meat a few times a week is a smart strategy to refuel and run fast. Here’s how to crunch those numbers like a carnivore. The recommendation for athletes is 0.3 g of protein per kg of bodyweight. So if you weigh 150 pounds, that’s 68 kilograms, or 20 g of protein you’re trying to hit every 3 to 5 hours, including after tough workouts. That could look like 1 cup of Greek yogurt with berries for breakfast, 3 ounces of chicken or turkey on your sandwich or salad for lunch, or 3 ounces of lean steak, pork, or lamb to go along with your sweet potato and green beans for dinner. That’s a pretty small portion, so be mindful, and skip marbled cuts, high in saturated fat, and processed meats, packed with harmful preservatives (that’s a hard no on hot dogs!). 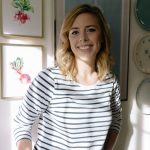